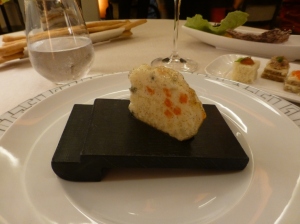 I had planned my short trip to Milan for non-food reasons.  A search for modernist cuisine led me to the 2-star Michelin Ristorante Cracco.  While they don’t have an online reservation system, they do arrange reservations via email.  I found out that I could not secure a dinner reservation for either of the nights I was to be in Milan due to events being held at the restaurant, but I could get a lunch reservation. That ended up to be fine, as the menus appeared to be the same for both.

This was the cocktail and champagne menu:

And this was the tasting menu for my lunch, as well as the a la carte menu:

To start off the meal, they brought bread selection from which I could pick, as well as several small bites to get started.

If you have a question or want to get in touch, leave a comment with your email and I'll respond. I won't publish the comment to maintain privacy. Travel blog at: Http:\\3millionmiles.blogspot.com