This two-star Michelin restaurant is one of my favorites.  Any time I have plans to be in New York, I feel compelled to try and secure a reservation either for lunch or dinner (and sometimes both). And it’s not easy to get reservations without some planning to be online right when they become available.  Despite having dined here many times, I don’t have a series of write-ups describing the meal experiences.  The primary reason had been that they had a policy of no photography.  I found that, without pictures, the descriptions I could have written would have been wholly inadequate (like my one and only write-up of momofuku ko).

In the fall of 2014, momofuku closed for several weeks to move to a new location just a little south of where they had been since they opened.  In December 2014, they opened with 24 seats instead of 12, plus a small bar and a couple of larger tables, as well as a much larger kitchen in the middle of the counter seating.  But the best part is that they changed their photography policy so that pictures without flash are allowed (I never use flash anyway).  So, as part of my winter holiday, I stopped in New York on my way back home from Europe to check out the new place for the first time. Currently, they only serve dinner. 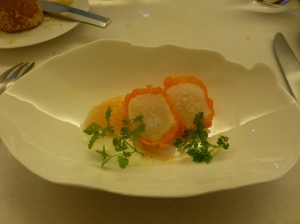 For some time now, I had identified a restaurant in Paris where the use of modernist cuisine techniques was a strong part of the menu.  Chef Thierry Marx has such a restaurant in the Mandarin Oriental Hotel called Sur Mesure, or so at least that’s what my searches seemed to indicate.  I worked in a visit to Paris over my winter holiday and secured a reservation via email for dinner.

The restaurant is behind a huge glass door on the lobby level of the hotel.  The décor can be described as ultra-modern and simple.

The tables were arranged around a small art arrangement which seemed to be set out in an open-air central room (I couldn’t tell for sure as it was dark).  I was offered the opportunity to order some champagne, and I selected the rosé.  Soon after, some crispy snacks were brought to the table, along with the menu rolled up with a napkin ring.

If you have a question or want to get in touch, leave a comment with your email and I'll respond. I won't publish the comment to maintain privacy. Travel blog at: Http:\\3millionmiles.blogspot.com